Illumination of objects under the dissecting microscope is quite easy, even with simple desk lights. This works tolerably for low magnifications. To watch aquatic organisms and cultures in petri dishes with best results, you need another approach. I tried several alternatives, beginning with built-in incident illumination up to gooseneck lighting. All these alternatives either made a poor illumination on higher magnifications or made a transportation for a field trip impossible. A DIY project was born to solve the problems.

In the last years there were tremendous improvements in LED design. For the shown illuminations I used normal 5mm white LEDs in ultra bright type. The LEDs were arranged ringlike under the specimen layer for a darkfield illumination. The first prototype used 8 LEDs, current models have 12 LEDs.

The base of the illumination table is constructed from a cylindrical POM (Polyoxymethylene) plastic. This material is easily workable with a lathe or mill. The outer diameter of the semi-finished POM is 102mm. There is enough space for the LEDs and enough diameter for fitting into the base-plate holes of different dissecting microscopes. Fitting the base plate hole of the microscope makes certain the table stays centered when manipulations are made on top of the table. The closing plate of the illumination table is constructed with white acrylic glass, the centric hole with the LEDs has a diameter of 30mm. The overall height of the table is about 30mm.

The 12 LEDs are arranged ringlike on a separate unit with an outer diameter of 45mm. This unit consists of a PCB and a plastic ring of 4mm height to stabilize the LEDs. Dimming the brightness of the LEDs is easily done with variation of the input voltage, a resistor for each LED is required. There is not enough space for wired resistors, I used SMD types instead. Two resistors, each 160 Ohms for each LED are used to ensure thermal stability. With a little experience SMD parts can be soldered by hand, optionally under a dissection microscope. To meet the correct angle for darkfield illumination. the LEDs are soldered to the ring-unit with a distance of about 20mm. With a simple bending of the LED wires the illumination angle is fixed to meet the different requirements. Optionally there are two switches to control a left and right sector of LEDs. 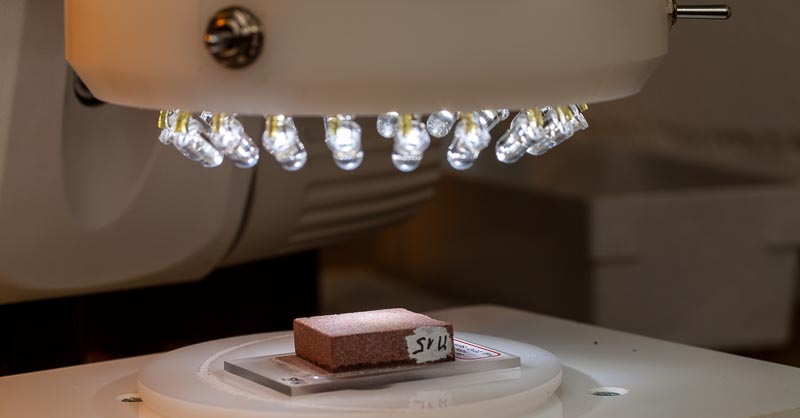 For all preparative work under a dissecting microscope the transmitted darkfield illumination has been tried and tested very well. The manipulation of smallest particles on slides works well without any disturbing shades. The three-dimensional illumination of the smallest aquatic organisms such as amoeba or ciliates looks amazing.

The LED ring for incident illumination makes a wonderful graphic light due to the even angle of the LEDs. Switching on or off the two sectors boosts the impression additionally. In spite of the small working distance a manipulation of objects under the illumination is still modestly possible.